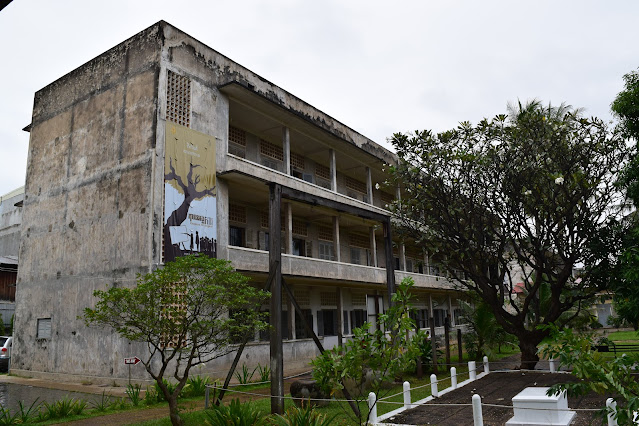 This was one of the most depressing days of our Cambodia trip. Being fully aware of what was in store for us, we were still taken aback and literally had tears in our eyes after S 21 prison and the killing fields memorial visit we could not digest the brutality and level of inhumanity that people could stoop to. It clearly projected a picture of what power can do and the greed for power can make people turn barbarians and actually enjoy the gruesome acts to instill fear and get their ideology accepted. 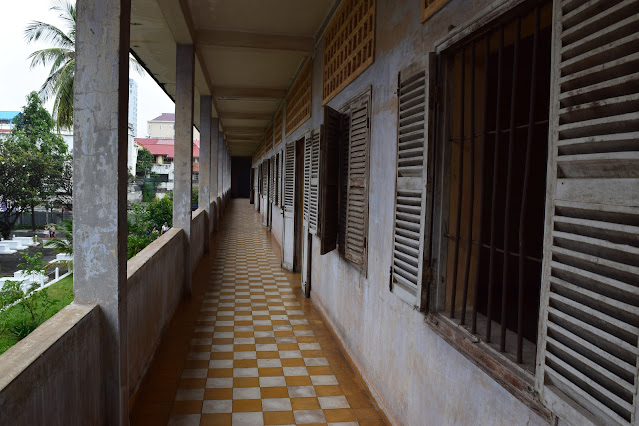 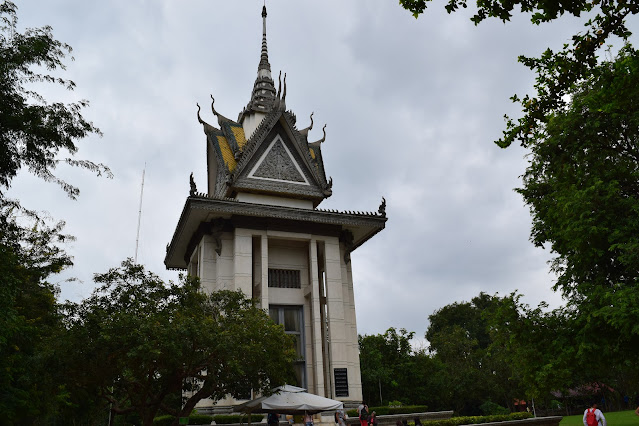 Tuol Sleng Genocide museum or S 21 is one of the most notorious secret prison of the 200 other prisons that were spread across Cambodia during the 4 years of Khmer rogue regime. It is estimated that between 12000 to 20000 people were imprisoned and tortured here before they were executed. There were only 12 confirmed survivors from this prison. Through out our couple of hours in this prison there was a grim eerie feeling. We felt as though the wall and cells were screaming out for help and justice. These walls have seen men, women and children being brutalized and tortured beyond imagination. It is gut wrenching to know what fellow human beings could do to one another. 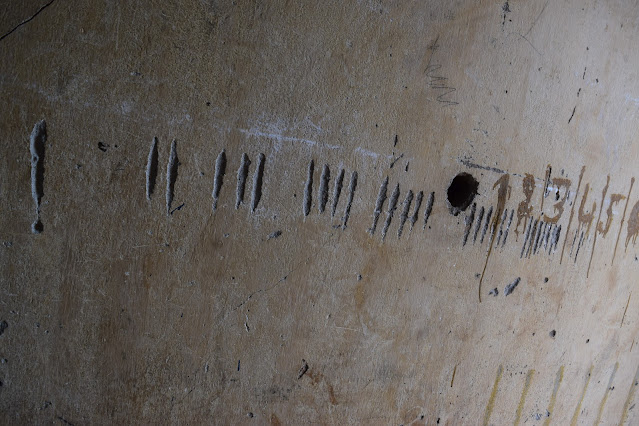 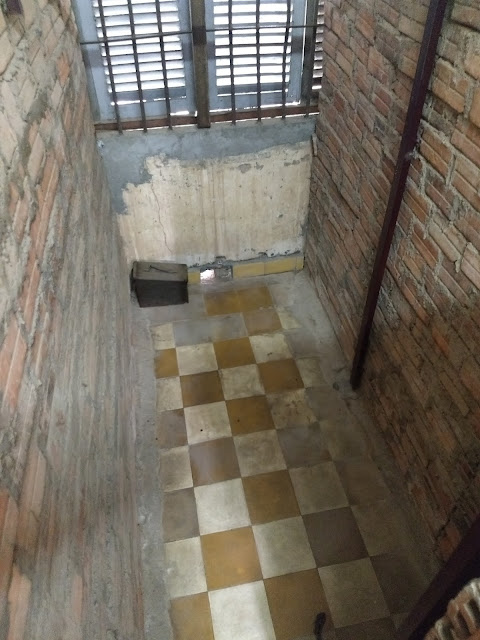 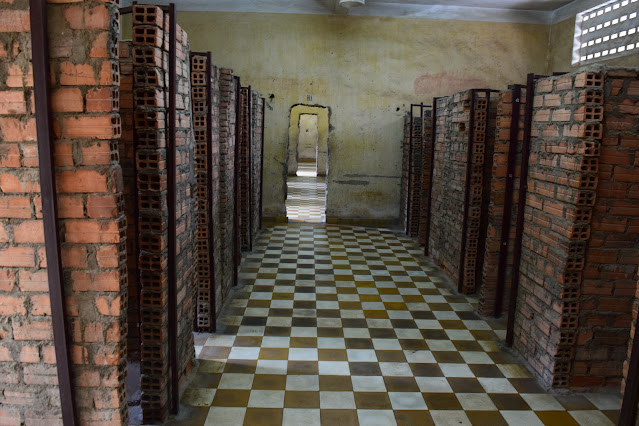 This place is not for the faint heart but is a must visit to understand Cambodian history. Much of the prison is left intact and gives a very real and raw experience. The black and white images and paintings are extremely graphic and horrifying. Once a charming school, where kids played around and studied, it fell into the wrong hands and turned out to be the darkest pages of Cambodian history. 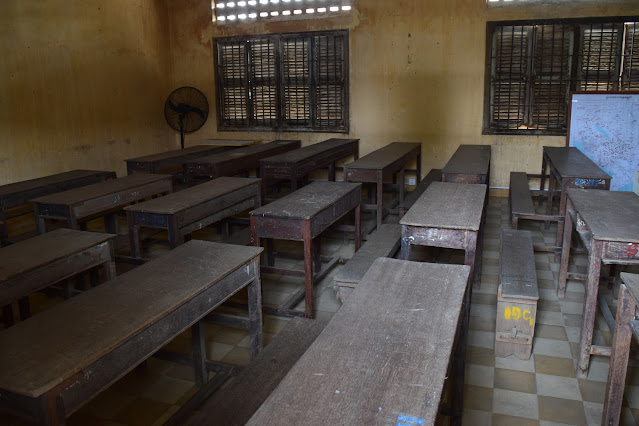 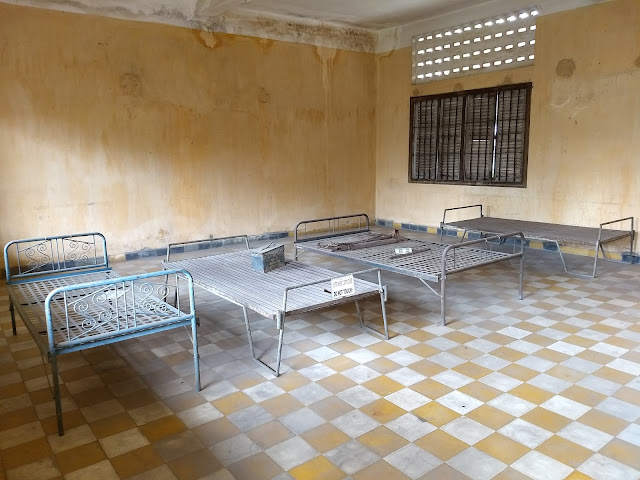 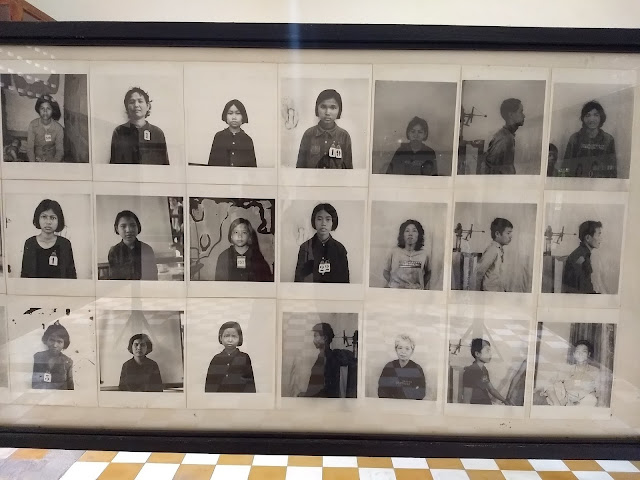 Our next stop was the killing fields. Again this is just one of the many killing fields in Cambodia where people were butchered and in the most inhumane way. Even young children were not spared as the Khmer rogues did not want them to seek any revenge. Once they ran out of burial space around S 21 prison, in hordes they drove prisoners who were tied blindfolded and gagged under the cover of darkness 15 kilometer away. They dug shallow pits, sprayed DDT and smacked people to death as bullets were quite expensive. People were brutally killed with hammers, axes, bamboo poles and we could just imagine how they would have pleaded for a quicker death. Most of them were not even dead and were still buried alive. 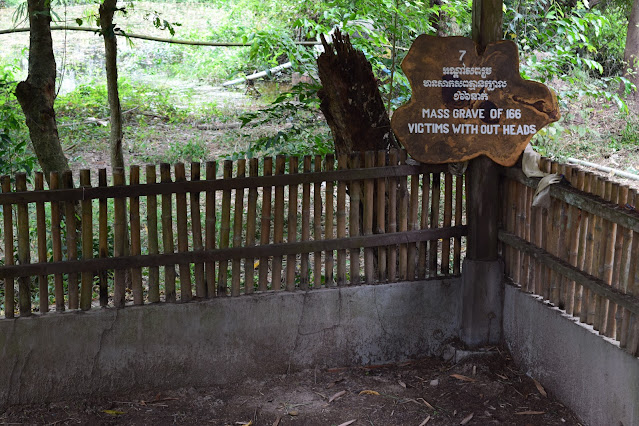 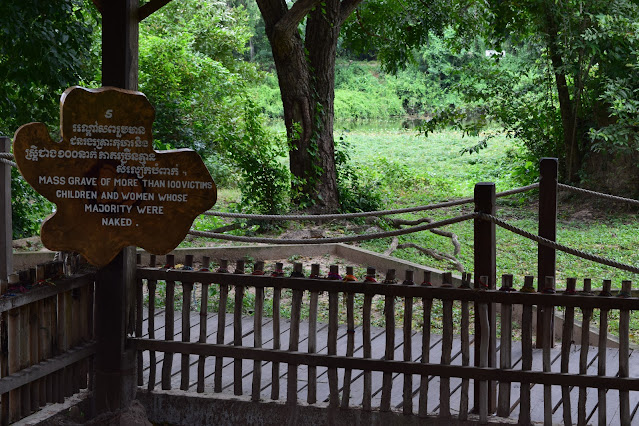 One of the pits here had 450 bodies in them. The most disgusting and tragic part was the killing tree where infants were smacked against the tree and killed in the most violent way possible. One in 5 Cambodians were killed by the Khmer Rogue regime. The memorial that stands tall here provided a glimpse of the brutality with skulls, bones and teeth recovered from the fields placed in a 17 tiered memorial. So many skulls were cracked open and punctured with sharp tools and weapons. The incident was so gruesome that even today we can find bones, teeth and victim's clothes strewn around the grave sight. 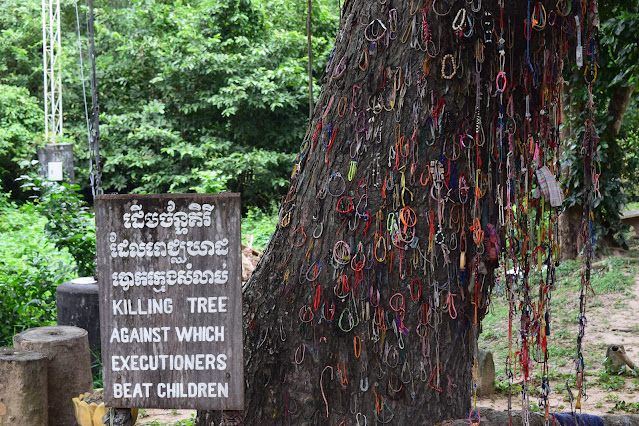 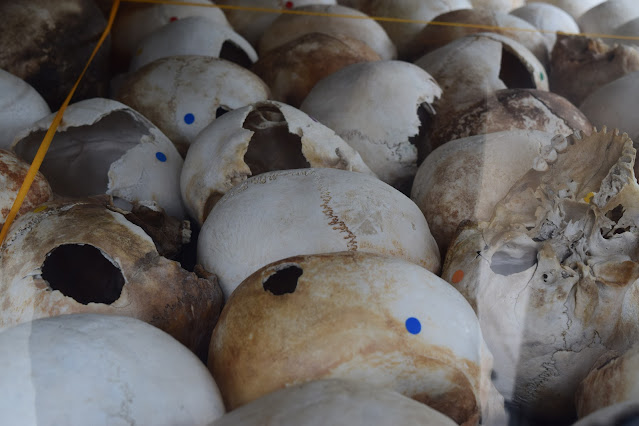 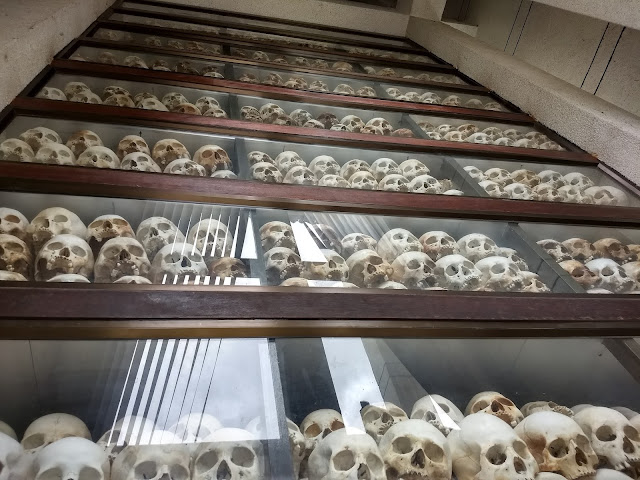 Following the depressing tour we did not feel like having lunch. This just reminded us of the fact that every wacko or nut job idea would definitely have sadistic fan following or supporters. Much like religion and new age gurus. 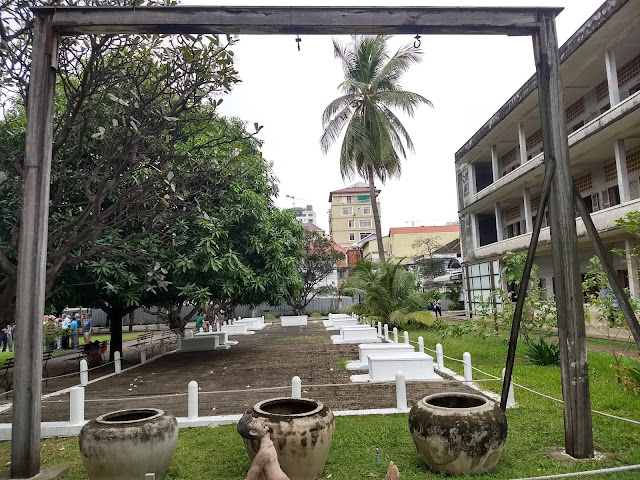 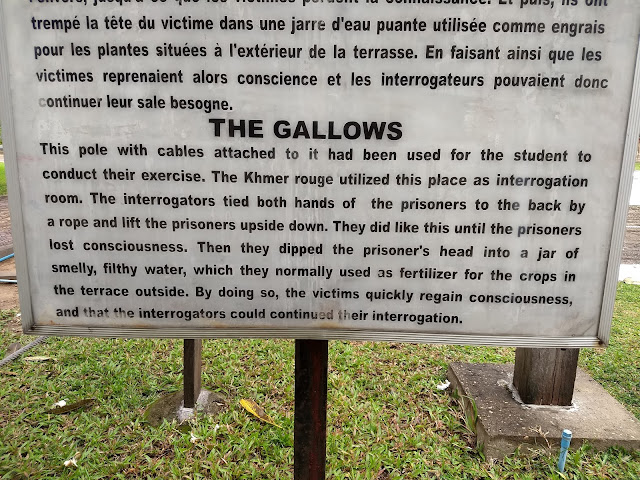 From looking at the fractured skulls to actually spotting the clothes strewn across and bones around on the fields just made us realize that these country men have been through terrible times and have survived the worst. The streets are filled with land mine survivors and they don't seem to carry hate in their hearts. The beauty of these people lies in them trying to move away from this gruesome past and ensure a brighter and peaceful future for the coming generations. 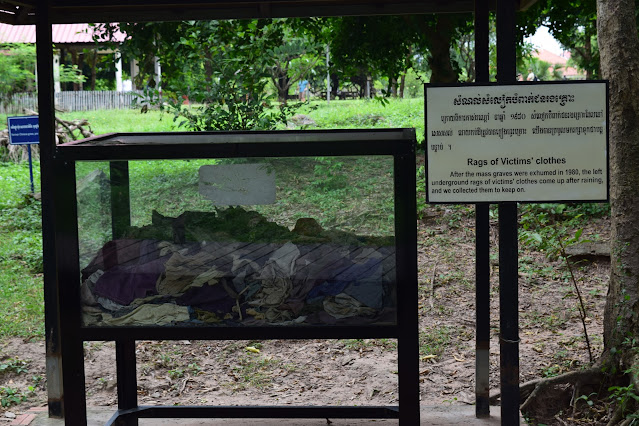 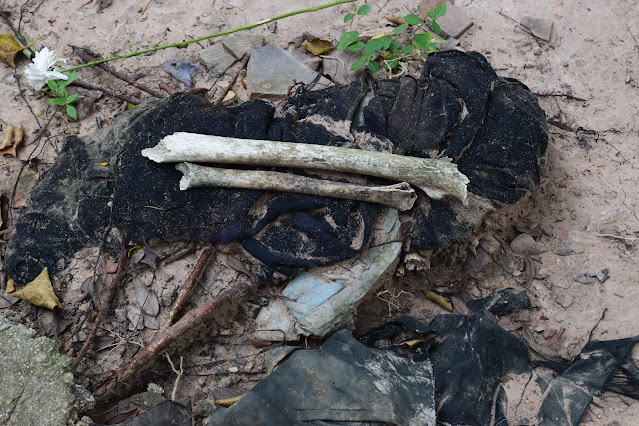 Entry is priced at USD 8 and 6 respectively which includes a very informative audio tour that is available in multiple languages. Our hostel arranged for our tuk tuk and charged USD 18 in total for gun range, S 21 and killing field. It was pretty much a whole day affair.
Posted by Ram & Reshma at 11:25 AM 2 comments:

6 Years Of Living A Nomadic Life After Quitting Google

A sailor is truly content only when s/he ventures out in the ocean.  Standing on the shore with the ocean beckoning he craves to be w... 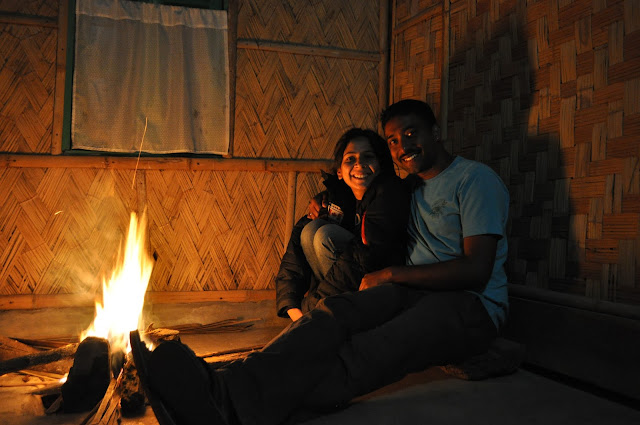 Ram & Reshma
Passionate Travellers, we quit our corporate jobs to make memories exploring the road less travelled. RoadTrips are our forte, giving us the freedom to traverse places at our own pace. 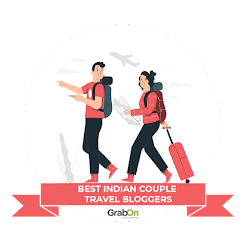